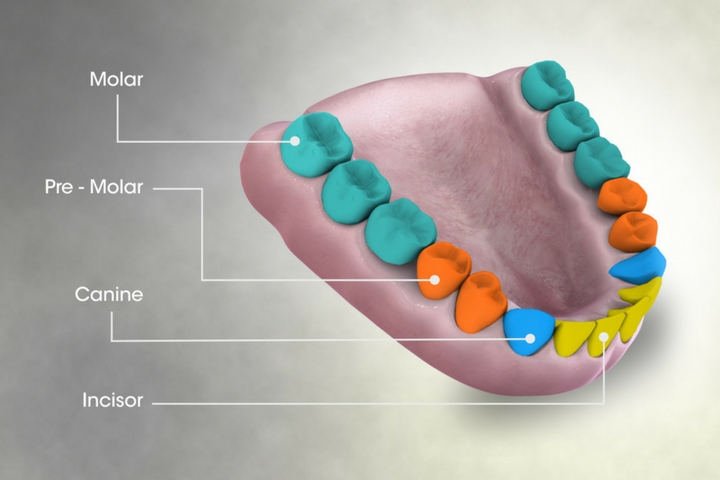 Different types of Teeth –  Your teeth and the structure of your mouth play important roles in your ability to eat, speak, and stay healthy.

Most of us take our teeth for granted — until something goes wrong. Not only do our teeth help us chew and digest food, they also play an important role in speech, and impact our health overall. By brushing up on your dental health knowledge, you’ll be taking the first step toward giving your teeth the attention they deserve.

How much do you know about your pearly whites?

The Development of Teeth

Humans have two sets of teeth: primary (or baby) teeth and permanent (adult) teeth, which develop in stages. Although the timing is different, the development of each of these sets of teeth is similar. Here are some facts about how the teeth develop:

According to Shantanu Lal, doctor of dental surgery and associate professor of dental medicine at Columbia University Medical Center in New York City, teeth tend to erupt in a symmetrical manner, meaning that the top molar on your left side should grow in at about the same time as the top molar on the right.

“Tooth development begins long before your first tooth becomes visible. For example, a baby’s first tooth appears at around six months, but development of those teeth actually begins during the early second trimester of pregnancy,” says Dr. Lal.

The crown of a tooth forms first, while the roots continue to develop even after the tooth has erupted.

The 20 primary teeth are in place between ages 2 ½ and 3 and remain until around age 6. Between ages 6 and 12, these primary teeth begin to fall out to make way for the permanent set of teeth.

Adult teeth start to grow in between ages 6 and 12. Most adults have 32 permanent teeth.

The Parts of the Tooth

A tooth is divided into two basic parts: the crown, which is the visible, white part of the tooth, and the root, which you can’t see. The root extends below the gum line and helps anchor the tooth into the bone. Your teeth contain four kinds of tissue, and each does a different job. These include:

Enamel This is the visible substance that covers the tooth crown. Harder than bone, enamel protects the vital tissues within the tooth. Enamel is made up of hydroxyapatite, phosphorous, and calcium.

Dentin Underneath the enamel you find dentin, which is calcified and looks similar to bone. Dentin is not quite as hard as enamel, so it’s at greater risk for decay should the enamel wear away.

Cementum This tissue covers the tooth root and helps anchor it into the bone. It’s softer than enamel and dentin; the best way to protect this softer tissue from decay is by taking good care of your gums. Cementum has a light yellow color and is usually covered by the gums and bone. But with inadequate dental care, the gums may become diseased and shrink, exposing the cementum to harmful plaque and bacteria.

Pulp is found at the center and core of your tooth and contains the blood vessels, nerves, and other soft tissues that deliver nutrients and signals to your teeth.

Types of Teeth and What They Do

Teeth help you chew your food, making it easier to digest. Each type of tooth has a slightly different shape and performs a different job. Types of teeth include:

Incisors are the eight teeth in the front of your mouth (four on top and four on bottom). These are the teeth that you use to take bites of your food. Incisors are usually the first teeth to erupt — at around 6 months for your baby teeth, and between ages 6 and 8 for your adult set.

Canines Your four canines (fangs) are the next type of teeth to develop. These are your sharpest teeth and are used for ripping and tearing food apart. Primary canines generally appear between 16 and 20 months, with the upper canines coming in just ahead of the lower canines. In permanent teeth, the order is reversed, with lower canines erupting around age 9 and the uppers arriving between ages 11 and 12.

Premolars, or bicuspids, are used for chewing and grinding food. Adults have four premolars on each side of their mouths — two on the upper and two on the lower jaw. There are no primary premolars; the first premolars appear around age 10, with the second premolars arriving about a year later. These take the places of the first and second primary molars (described below).

Molars are also used for chewing and grinding food. Primary molars, also known as deciduous molars, appear between 12 and 28 months and are replaced by the first and second premolars (four uppers and four lower) described above.

The permanent molars (also four upper and four lower) do not replace any primary teeth, but come in behind all of them, further back in the jaw. The first permanent molars erupt at around age 6 (before the primary molars fall out), while the second molars come in between ages 11 and 13.

Third molars The third molars are commonly known as wisdom teeth. These are the last teeth to develop and don’t typically erupt until age 18 to 20. Some people never develop third molars at all. For those who do, these molars may cause crowding and need to be removed. If they don’t fully erupt they are said to be impacted and are commonly removed.

Your mouth is important, so don’t take your teeth or oral health for granted. “For good dental health, brush and floss your teeth regularly, don’t smoke, eat a healthy diet, and see your dentist regularly for dental cleanings and checkups,” advises Lal. A healthy mouth makes for a healthy body — and a pretty smile.

Missing Teeth Know Your Options – Different treatment options are available for missing tooth but it is very important to find out the best one. Before, Dental bridges were the only option against missing teeth. These days, dental implants are available to provide the most natural looking and hassle free smile. Dental implants allow close to natural eating and bite. While using implant you can brush normally. Other options for missing tooth are bridges and removable dentures. As both the bridge and the removable denture do not replace the root they do not offer any protection to the bone. However, if you want a long term solution for missing tooth which can provide beautiful and natural smile, dental implants are the best option. Same day fixed teeth and one day implant are excellent choices if you want to go for implants. Here we will be looking at the benefits of dental implants.

DENTAL IMPLANT AS AN OPTION TO YOUR NATURAL & HEALTHY TEETH

Being strong and stable, implant can last longer than any option of missing tooth. It can restore the lost tooth in such way that the fitting and functioning will be like natural teeth. While looking at the cost benefit ratio, dental implants provide the best experience.

Dental implants offer long term advantage. International accepted success rate if 95% over 5 years and 90% over 10 year period. Dental implants may require minor adjustments over the years but they do offer longest solution to missing teeth available today. You do not need to feel embarrassed because of using removable dentures. Very often, dentures loosen or fall out while laughing or talking. For this particular reason, you should be using dental implant as a permanent solution for your missing teeth.

To speak and look perfectly, dental implant is best choice for you. There will be no grinding of teeth while using implants. When no root canal is possible, dental implant can be an excellent option after cleaning the chambers. There will be no cavities while using implants. In this way, no grinding of teeth is needed and no root canal will be required. Implants play significant role to protect your healthy teeth. It allows you to eat your favorite dishes as well. However, the dental implant has proven record of reliable and successful outcomes and that is why it has been considered as more predictable treatment method than other options for missing teeth like bridge or removable denture.

It takes around 6 minutes to place one dental implant. Implant is usually placed in the position of the missing tooth. The crown is then fixed on the implant. This complete procedure for one or more implants can now be done in a single day.

It is important to keep good oral hygiene to ensure the success of the entire procedure. Implants are susceptible to peri-implantsitis which is an infection that can lead to bone loss and implant failure. Regular check with the dentist is required to make the implant process successful.

“*The information contained above are true to the best of our knowledge. All recommendations are made without guarantee on the the of the author or publisher. The author and the publisher disclaim any liability in connection with this information. It is the best that a consultation with a qualified doctor/ dentist be sort for any treatment.”

Dr. Arun Chamria has done advanced in surgical techniques in Dental Implants at Germany under Dr. Manfred Lang and thereafter had advanced training for fixing implants in a poor bone at Los Angeles under Dr. Parel and Dr. Peter Moy. He also undertook training in ethical practice management at Los Angeles, and also worked under Dr. Dahlberg and others; at Sweden University Hospital and learned, innovative technology in sinus lift and other advanced surgical techniques.

Dr. Arun Chamria also presented a paper at World Congress Oral Implantology, at Honolulu, the USA on immediate loading Implants and how to retreat failing dental implant in March 2004. The scientific committee of this apex organization of the world congratulated Dr.Arun Chamria for his expertise in Dental Implant Community.

He was also the first Indian Dentist to be associated with Computer Guided Implantology and learned the technique at Grenoble France much before the said technology being introduced by Nobel Biocare at Las Vegas in December 2005.

He also learned the most advanced and latest technology in dental implants known as “All on 4”.

Dr. Cherry Chamria Sureka did her graduation and post graduation from Mumbai in Periodontology and Implant dentistry. Her scientific paper was acknowledged and accepted by the most prestigious instituition – Euro Perio at London in 2015.

She has undergone specialized training in microscopic endodontics & save your teeth from University of California-Los Angeles, USA.

She also takes special interest in cosmetic dentistry as well as Facial Esthetics and is in the forefront of technology with abundant knowledge in Digital technology.